A strong jet stream will move to the east towards Greece, bringing several shots of cold air, creating a significant temperature drop to the Balkans. The next two days the Balkans and especially Greece will expect strong winds, heavy rain, snow, thunderstorms and hail. These severe weather phenomena will be created thanks to a low pressure system (which is called Diomedes), located today in the Ionian Sea, which will slowly move southeastwards towards southern Greece, as well as to the advection of arctic air masses due to an anticyclonic wave event over northern Europe.The name Diomedes was given by the Hellenic National Meteorological Service. But which regions will affect the most?

HEAVY SNOW, THUNDERSTORMS AND GALE FORCE WINDS: On Tuesday 11/01 heavy snow is expected in the Balkans, especially over Northern Macedonia and Bulgaria. Almost all regions of Greece will be affected by Diomedes. Heavy rain and thunderstorms across coastal areas are expected in eastern Greece, due to the strong northeastern winds, with gusts reaching locally 90-100 km/h in the northern Aegean Sea.  Meanwhile, heavy snow will be spread over medium or high altitude. Rain totals in some cities of Magnesia (central-eastern Greece) can reach locally even 150mm. Heavy thunderstorms are expected across the Aegean Sea and Crete. Strong southern winds from Libya, with gusts reaching 50-60km/h in southwestern Crete, will deposit Saharan dust over Crete as the low pressure system is moving more to the south. There is also a possibility of waterspouts to appear across the Ionian and Aegean Sea.

THUNDERSTORMS, SNOW OVER LOW ALTITUDE AND GALE FORCE NORTHEASTERN WINDS: On Wednesday 12/01 snow will appear even in low altitude or sea level locally in northern Greece and in the morning is expected to be heavy in places. As the low pressure will continue to move to the south it will bring some sunny spells to the north, while southern Greece will be affected by the system which will spread rain or thunderstorms, turning heavy over the Crete and Cyclades. Wind gusts of 90-100 km/h are expected across the Aegean Sea.

DIOMEDES: Diomedes was a hero of Greek mythology and a king of Argos, well-known mainly, for his participation in the Trojan War. He was one of the warriors who invaded Troy using the Trojan Horse. 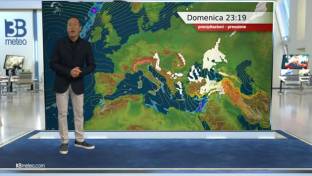