The next few days arctic air masses centered over Scandinavia  will move towards the south due to the anticyclonic wave which will dominate western and central Europe. The big temperature difference between the cold air masses of the northeast and the warm of the west will create a strong jet stream which will help the arctic air masses to slip, affecting mostly eastern Europe and the Balkans. This big weather difference will bring heavy snow, blizzard conditions, floods and strong winds to the east, while on the other hand western Europe dry and sunny spells are expected. But which countries will be affected the most?

THURSDAY 20/01: a deep low pressure system over Scandinavia will move southeastwards spreading snow across central-eastern and northeastern Europe. The countries that will experience heavy snow, even at sea level, are Finland, Poland, the Baltic states and Belarus as the cold and northwestern wind will bring all the appropriate humidity that is necessary for these conditions to occur. Blizzard conditions are possible to the Baltic states as gust winds can reach 80-90 km/h due to the passing of the low pressure system. The arctic northwestern winds will be able to create huge waves on the coasts and especially on Lithuania's and Latvia's, while on the Baltic sea wind gusts of 110-120km/h. Another low pressure over the Adriatic Sea will bring unsettled weather conditions spreading scattered wintry showers across Italy, rain or snow over the western Balkans, turning heavy in places.

FRIDAY 21/01: the low pressure system across northeastern Europe will continue moving southeastwards spreading heavy snow and temperature drop across northeastern Europe. The countries which will be affected the most are the Baltic states, Belarus and Ukraine. On the south, the low pressure system in Adriatic Sea will move southeastwards, spreading wintry showers across Italy and the Balkans, turning heavy over Montenegro, Albania, the North Macedonia and Kosovo. The strong westerly or southwesterly winds of the system will bring heavy showers on Friday across western Greece, Crete, thunderstorms over the Aegean Sea and snow in northern regions of the country. 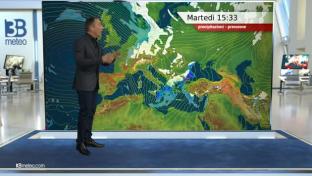