The storm Elpis dominated Greece the last days bringing severe weather conditions and snow over 1m, locally. The storm Elpis caused a historical snowstorm in Athens on Monday 25/01, as locally the snow reached 60-80cm or more in mountainous areas. The biggest amount of snow was concentrated in the northern and eastern areas of Attica (the region of Athens) due to the northeastern winds.

The changing of the Guard in the snow in Athens with the Acropolis as a backdrop! Just Spectacular! #athens #snow #Acropolis #Parthenon pic.twitter.com/BlDVCzNHvb

But what are the reasons behind this severe event? Arctic air masses from western Russia moved towards Greece creating a low pressure system over the Aegean Sea. As the air masses were really cold (~-40C 500hPa) and the temperatures near ground were warm a big atmospheric instability was created which caused this severe snowstorm in Athens. The snowstorms are not unusual in Athens as they have happened the previous years. Storm Media had given bigger amounts of snow over the western regions of Athens than storm Elpis. Locally in Athens, for example in Ilioupoli the snow was ~60cm, make this snowstorm the strongest of the last maybe 40 years. We can not say this was the strongest snowstorm of the last years or the big snowstorm of 1987 was the strongest, because is always depends from the city. The cold temperatures of storm Elpis create a lot of snow in Athens, but the snow was not heavy, as it was with storm Media, due to the fact that during low temperatures it can not exist a big amount of humidity. In this case there was not much damage to the trees like last year, but a lot of roads were closed and cars were trapped under the snow.

SNOWCOVER NEAR SEA: In many cities or islands of Greece the snow reached sea level. Tinos, Mykonos, Santorini, Skiathos, Elounda in Crete and other islands in the Aegean Sea were dressed in white.

TOTAL OR PARTIALLY FROST: On Monday and Tuesday many cities of northern or central Greece had all day, temperatures under 0C. On Tuesday morning, according to the National Observatory of Athens, minimum temperature in Neos Kaukasos was -16.5C, in Agios Pavlos Imathias was -15.2C,  in Neurokopi was -15C and in Vovousa Ioannina was -14C.

STRONG WINDS: according to the National Observatory of Athens on Monday gust winds of 109km/h were recorded in Anavissos (Athens) and 98km/h in Karystos island. 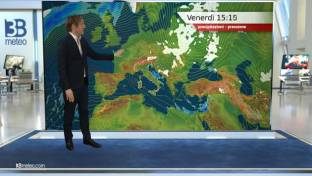